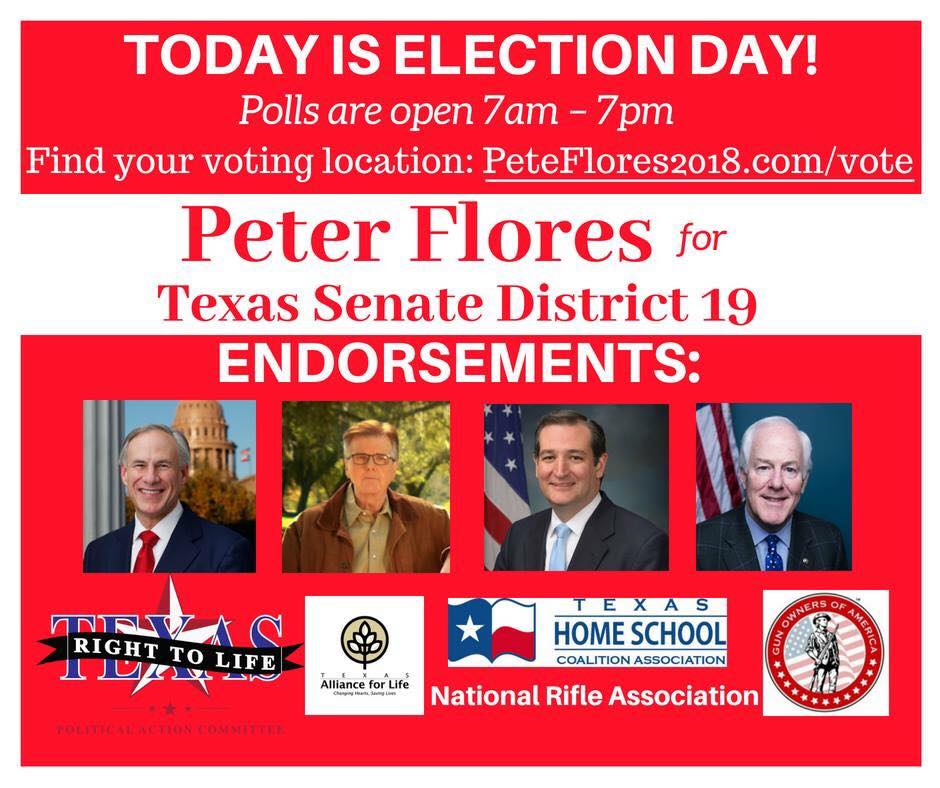 Peter Flores and Pete Gallego took first and second place, respectively, with Gutierrez coming in third. Flores and Gallego will advance to the runoff election to fill the remaining two years of the term.

The 2 leading Democrats in the race largely worked against each other, paying little attention to Flores, or Sen. Uresti’s brother Rep Tomas Uresti (D-118), who scarcely made a splash. The 2 main avenues of attack were Gutierrez’s unpaid taxes, and Gallego’s dubious claim to actually being a resident of SD-19 (a requirement in Texas for state legislative districts). In sharp contrast, Flores conducted a squeaky clean campaign, with no hint of scandal, and in fact the opposite. Flores is known to community members as a dedicated public servant in law enforcement, faithful Churchgoer, and devoted husband.
Of the 26,077 votes cast, Flores earned 8965 (34.4%), Gallego 7541 (28.9%), and Gutierrez 6351 (24.4%). No other candidate earned more than 700 votes.

Due to the unusual timing in the middle of the summer, and the short time period after the election was called by Gov. Abbott before voting began, turnout was low, with fewer than 17,000 people voting early, and around 8000 on election day, amounting to about 10% of the votes cast in the 2016 race. Turnout in the upcoming runoff will likely be even lower than the already historically low turnout so far.

Gallego will continue to struggle to answer questions about whether he truly lives in SD-19, and why voters should give him another chance to represent them, when he was already voted out of office in CD-23 in favor of another Republican, Will Hurd, whose district overlaps almost entirely with SD-19.