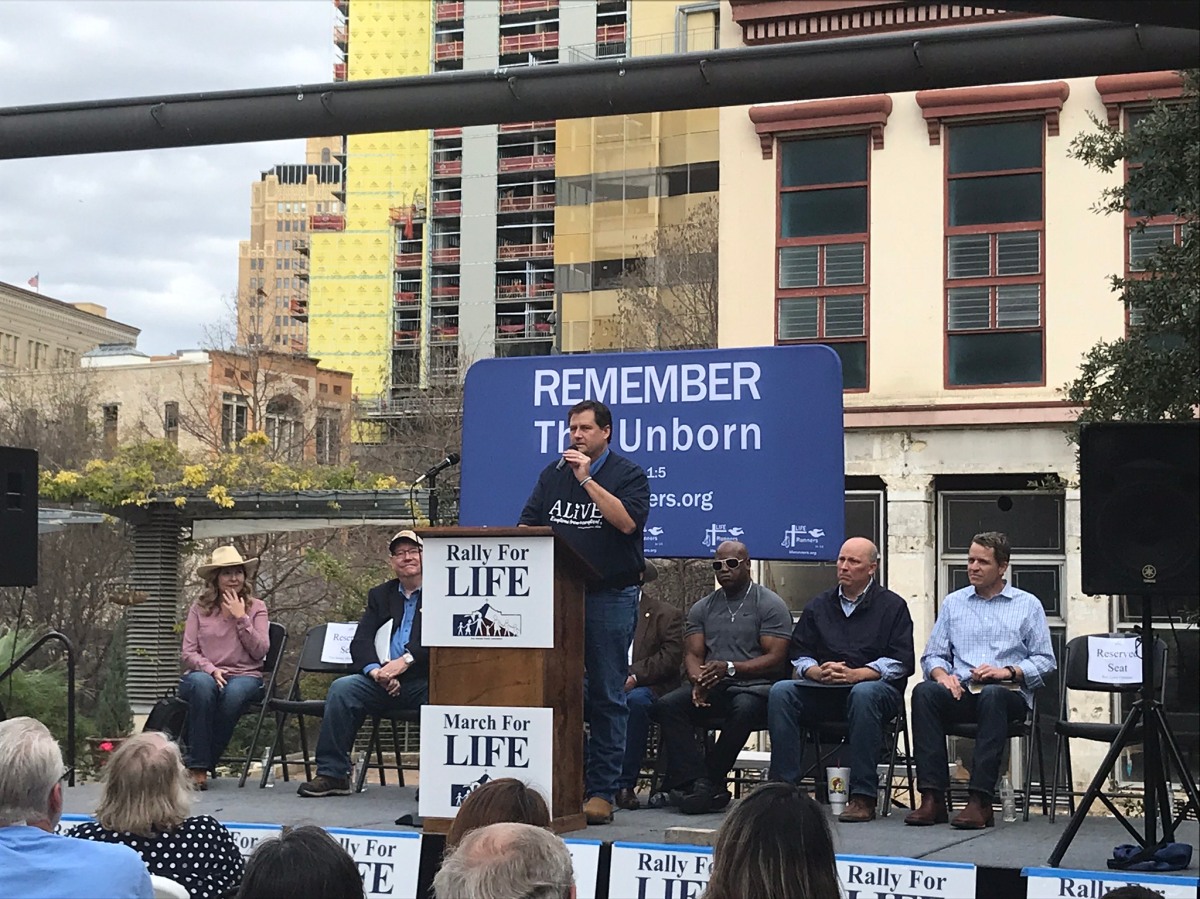 On Saturday, hundreds of San Antonians marched downtown from the Alamo Plaza in peaceful protest of Roe v. Wade. Both the young and old attended, including Pro-Life groups from Trinity University and UTSA. The Knights of Columbus headed the march, with the March for Life banner behind them.

“We know that if San Antonio goes, then Texas goes. And if Texas goes, then so does the United States of America,” Dr. Castle said on stage.

The rally started with Reverend Will Davis leading prayer.

Terry Herring of Allied Women’s Center was the first to speak, motivating her listeners to do more for the Pro-Life cause. “It’s time to leave our comfort zones… to take your pro-life involvement to a higher level. Ask the Lord, God, today, ‘What can I do to put on the heat?’ There’s a lot more that needs to be done.” She then cited how she has been arrested seven times outside the abortion clinics while taking pregnant girls in. “I want to challenge every one of you here: get out of your comfort zone. Brace the heat. And we’ll see you next year, and you can tell me, ‘Hey, this is what I did to brace my heat.’” She then introduced her own granddaughter to show that even the smallest of them can do something. Herring spoke about how her granddaughter spent many of her afternoons at the Allied Women’s Center helping give out diapers to pregnant women in need. “No matter how old or how small you are, there are things you can do to help,” Herring said.

Congressman Pete Flores of District 19, the largest senate district in Texas, also spoke at the rally. “I believe that most of us in Texas, especially in the district that I represent, are pro-life. We are pro-family. We are pro-God. We are pro-country. And for that we also do not apologize to anyone,” he said. He described how he and many other Texas representatives in the last Texas legislature struck all the abortion bills down and passed Senate Bill 22, which protects taxpayers from subsidizing abortion providers and their affiliates, and House Bill 16, which protects children born alive after abortions. “It’s a shame that in this day in age that we should even have the conversation about terminating a human being on a botched abortion… we should not even be discussing this topic in our great United States of America, much less our magnificent Texas.”

Congressman Flores then called for everyone to show up at the polls. “At the last city elections here in San antonio, 14% showed up. The rest stayed home, and then we want to complain about the policies that come up after that. A lot of our opponents say that elections have consequences. They sure do… You must stay involved. You must stay engaged. You must have a voice. And you’re doing it today. If you don’t stand up, then you’ll be dictated to… So let us know what you think. Be vocal. Hold us accountable, always, and if we don’t do our job, vote us out. That is a life from the moment of conception. It’s a human being with a separate soul that God knows. And it’s up to us to protect them.”

After Congressman Flores, Congressman Roy spoke up at the rally, calling to attention that Martin Luther King Jr. Day was also coming up alongside the anniversary of Roe v. Wade. He quoted Martin Luther King Jr. that “we want to be able to celebrate the content of one’s character, not the color of their skin. Yet, the color of your skin or your economic circumstances of your parents are now too often deciding whether or not you live or die before you are given the first breath of life. That should not be the case.”

Graduating Trinity University in 2022, Angelique majors in Psychology and Business Administration. She is also the president of Trinity's pro-life club, Tigers for Life, and loves her pug very much. View all posts by Angelique Lopez