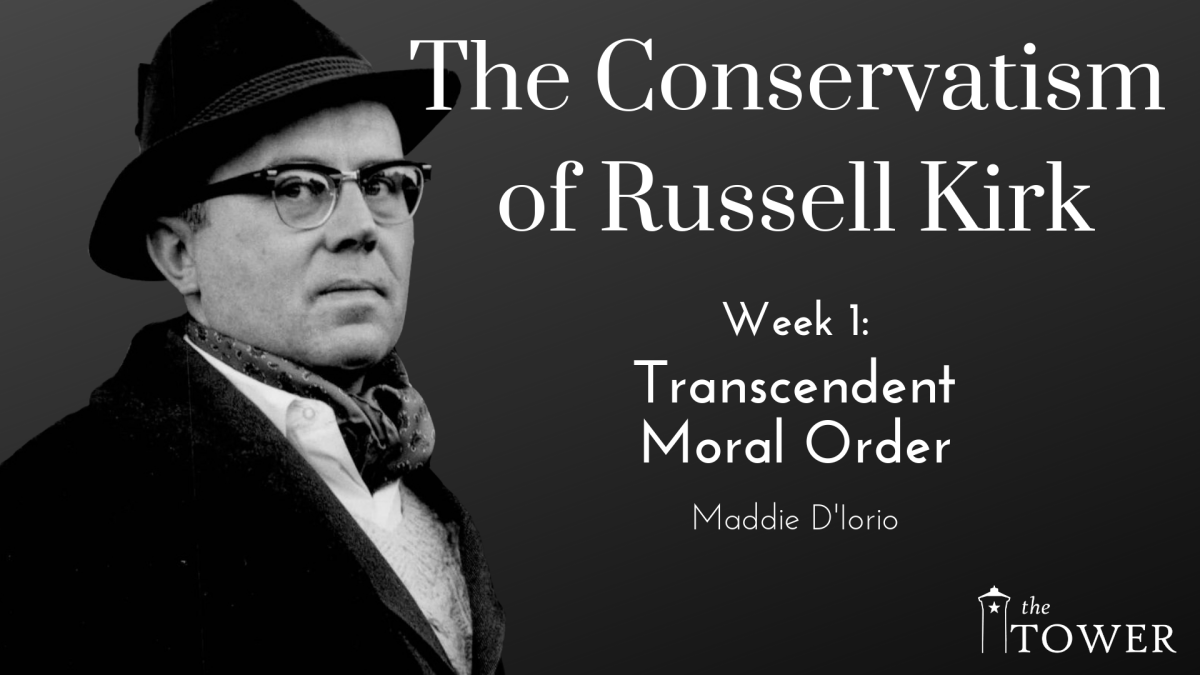 The first and arguably most fundamental of Russell Kirk’s ten conservative principles is the belief in a transcendent and enduring moral order. Kirk was not the first to observe moral order; men have hypothesized that human nature is built with a certain order since ancient times. In Plato’s Republic, we find a theory of the tripartite soul, in which the psyche is made up of three parts: λογιστικόν (reason), the θυμοειδές (spirited) and the ἐπιθυμητικόν (appetitive), and it is the harmony of the soul which is true virtue and justice. A virtuous man “rules himself, puts himself in order… harmonizes the three elements together, just as if they were literally the three defining notes of an octave”.

Plato’s city-soul analogy shows that we may apply the order of the soul to society at large. Without an orderly soul, man cannot be wholly virtuous, just as without an orderly system of morality a society cannot be wholly virtuous. If everyone is using his own personalized system of morality and nothing is truly right or wrong, society will be doomed to fall into anarchy, which will later lead to tyranny. We must all have the courage of our convictions—the desire to do what is true and virtuous—in order to keep a just society.

Contemporary America has fallen far from Plato’s view of an orderly soul and Kirk’s assertion that a transcendent moral order is paramount in the creation of a good society. Moral relativism has been on the rise for decades as individuals shun societal norms and values in favor of the belief that morals are relative to their holders. In other words, right and wrong are not the same when applied to everyone, but instead are up to the individual to decide.

This moral relativism is everywhere, from media to legislation to personal relationships. For conservatives, the most striking examples are the legalization of abortion in Roe v. Wade in 1973 and the redefining of marriage in Obergefell v. Hodges in 2015. These two Supreme Court cases decisively changed the meanings of life and marriage. They altered American societal morals, as generations after these rulings have been indirectly or directly taught new forms of justice.

Millennials’ views on abortion show this principle strikingly. As this Pew Research study indicates, non-religious young people overwhelmingly (70 percent) believe abortion should be legal in all or most cases. What used to be a highly contentious issue is much more one sided for non-religious millennials, as the gap is only widening for that demographic.

For Christian (both Catholic and Protestant) millennials, however, the picture is much different. It is either a near 50/50 split or a strongly anti-abortion result, showing the difference in opinion amongst young people who have some sort of belief in biblical principles. These young people are often extremely passionate about the pro-life cause and are joined by some non-religious pro-life activists as well.

This is only a small example of a larger notable trend in the relationship between young people and moral relativism. Pro-life activism comes from a place of very strong moral feelings which argue against relativism: all humans deserve the right to live and die naturally and not at the hands of any human being. However, it is not just the conservative religious young people who are making these sort of ethical appeals.

Just take a look at college activism. Yes, sociology professors are still making the argument that we must respect all moral systems equally, and the general university populace is still entrenched in hookup and party culture, but young progressives make values-based arguments all the time. The immigration debate largely takes place within a consideration of justice (on both sides), and the left often discusses racial issues in regards to atoning for the sins of the past.

Although I do not agree with these progressive systems of morality, it would be dishonest not to call them moral systems. Instead of reverence for God and the family, college-aged liberals see tolerance and progressivism as the basis for their moral code. They become indignant when they see something is unjust—in their eyes—and they desire to make a change to fit their system of moral order. They fight for what they view as morally right and see moral wrongs as a form of injustice.

This is why the fight young conservatives carry out is no longer just about moral relativism. Although our parents and grandparents dealt with a world that was fully steeped in this toxic philosophy, we are in a space in which both sides are making ethical arguments.

Our morality is no longer derived from a higher power and a transcendent right or wrong, but instead the desire to climb up the ever-extending ladder of progressivism, constantly desiring to reach the apex of tolerance. Only this can never be reached, as by definition to be progressive we must constantly be moving forward, rather than considering why we’re even changing our moral values in the first place.

The key, I believe, is not to convince the other side that there is such a thing as right and wrong. They already know this (for the most part), but they are not guided by the same transcendent and enduring moral principles. It is up to us to share these values not by yelling and shoving them into their faces, but instead by living them out in our own lives. We cannot restore the order of society without first restoring the order of our own souls, as justice is “concerned with what is inside,” as Plato states.

We cannot solve all of society’s problems in a day. While we can spend our time hand-wringing and worrying about the fastly degenerating state of our universities and other social institutions, we should never succumb to the fear that the true transcendent moral order will be destroyed. As Kirk said, “human nature is a constant, and moral truths are permanent”, and to think that our generation will break apart this enduring fabric of humanity is simply self-centered and ignorant. We must cling to these moral truths with all of our strength, but also have faith in their lasting endurance.

Justice and virtue may be difficult to find in these murky waters of contemporary society, but they are still present—as they will always be.

Maddie is a Sophomore at Trinity University, majoring in Economics with a concentration in Public Policy. She is on the leadership board of the Young Conservatives of Texas at Trinity University, opinion writer for the school paper The Trinitonian, and was a senator of the Student Government Association in the 2018 administration. As the Deputy Editor for the Tower, Maddie focuses on local and campus news of interest to conservatives, as well as continuing to build the publication. She is also Lifestyle Editor and will serve as Editor-in-Chief in 2019-2020. View all posts by Maddie D'iorio